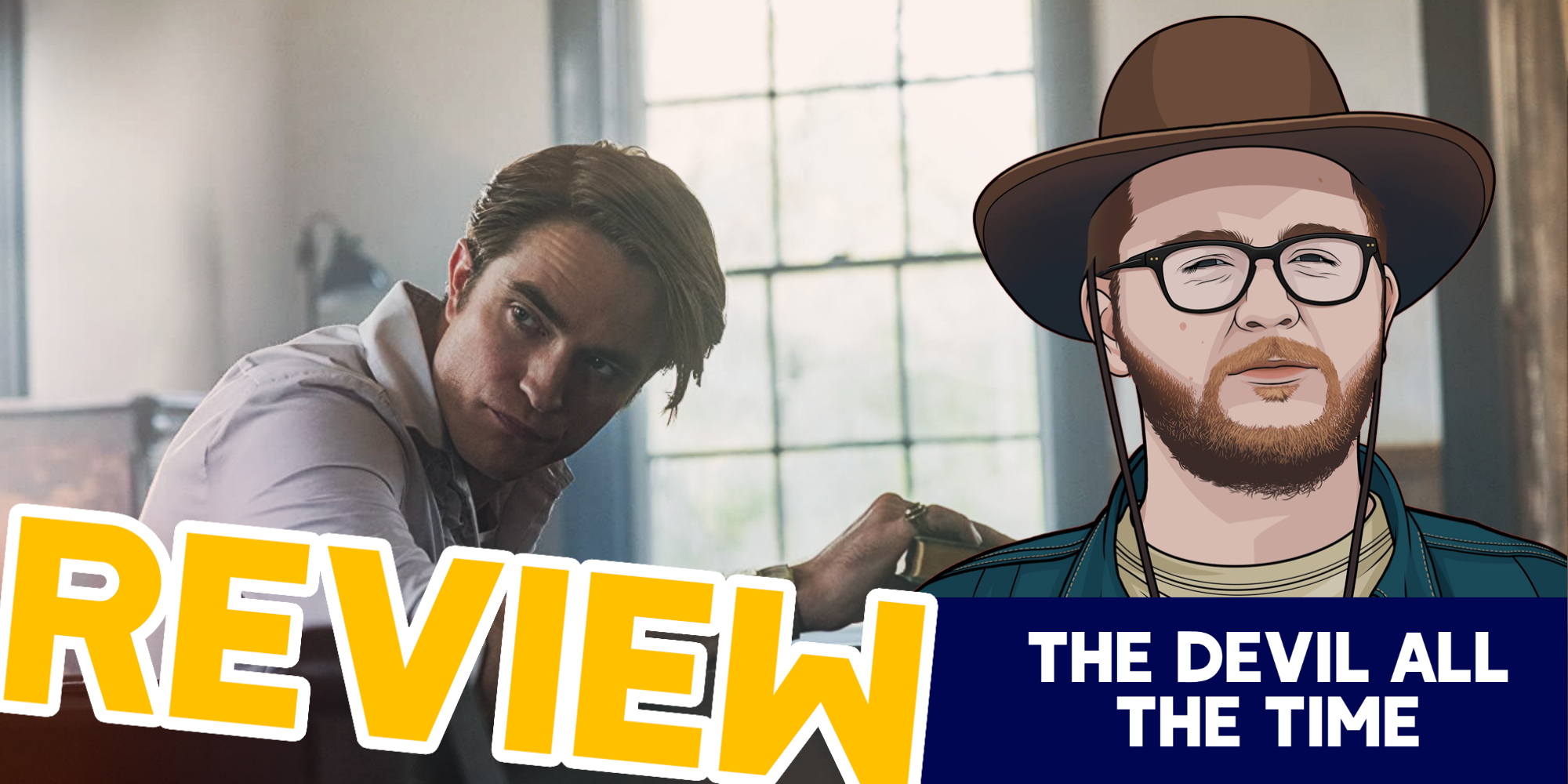 For any of you “Hollanders” out there who are wanting to check out the latest Tom Holland movie on Netflix, I warn you that this film is not for the faint of heart and gets pretty dark and serious. Tom ain’t playing your friendly neighborhood Spiderman in this one.

Honestly, I hardly knew anything about The Devil All the Time before getting into it. I saw the trailer and was instantly intrigued by its tone and cast. Of course, we’ve got Tom Holland in the first film I’ve seen him in outside of the Marvel films. We’ve got Bill Skarsgård who was almost unrecognizable without the clown make-up he wore as Pennywise in the It movies. There’s also Sebastian Stan, also known for his as the Winter Soldier/Bucky Barnes part in the Marvel films. And, of course, y’all know how much I love me some Robert Pattinson. So it’s almost like a dark crossover episode with Spiderman, Pennywise, Winter Soldier, and Batman!

I learned later that this Netflix original is based on a book by the same name, written by Donald Ray Pollock who also provided narration for the film. As far as what I’ve read in the plot synopsis, the film is pretty darn faithful to the source material. In fact, the way the film’s plot flows feels much like a book. The film introduces you to characters and their stories, transitioning into another character’s storyline. It’s a very unorthodox structure for a film, but I like how they kept true to a reading feel for this adaptation.

In The Devil All the Time, we’re introduced to a handful of different characters living in Southern Ohio and West Virginia post-World War II. These characters include a disturbed war veteran by the name of Willard who returns home to marry the pretty waitress he meets and has a son named Arvin. We’re also introduced to a crazed and charismatic preacher named Roy who marries and has a daughter named Lenora. We also come across a husband and wife, Carl and Sandy, who may seem nice but are actually serial killers. Sandy also happens to be the sister of the local corrupt peacekeeper, Sheriff Bodecker. As the film progresses, we see how each of these individuals’ lives intertwine in very shocking ways.

I gotta say, the performances sell the story. Tom Holland does a surprisingly great job as the very serious Southern boy Arvin. It makes me excited to see him try other roles outside of the Marvel universe. Bill Skarsgård is also great as Willard – the very distressed father who wants to do the right thing, even if he doesn’t always do it. He’s very endearing and great at the whole “trying to be manly but is obviously struggling with stuff” act. Harry Melling’s knack for theatrics really helps him fit in as the misguided charismatic preacher Roy. It definitely makes up for his lackluster performance in his previous film The Old Guard.

But, of course, you all knew I was gonna say this: Robert Pattinson shines as Reverend Preston Teagardin, a conniving, manipulative preacher who comes into town and is up to no good. He’s cunning and slithery; he’s absolutely fun to watch. Pattinson puts on a bizarre, exaggerated accent and it fits the reverend perfectly. You come to hate the character because Robert Pattinson does a good job making you hate him.

I was overall pleasantly surprised by this film. It’s shot competently. The performances are excellent. I love the Southern gothic tone. I like the message the story is trying to get across. A lot of the film is very critical of religion, but I felt like it was more critical of corrupt religious leadership than religion itself.

With all that said, I do have a few nitpicks. One in particular is the pacing in the first act of the movie. The film is introducing a lot of stuff and a lot of characters and it can feel overwhelming. But it all becomes worth it in the end. I just wish the filmmakers could’ve let some scenes in the first act breathe a little bit before moving on to the next. I felt like the film was rushing.

The music in this film is decent, but there were one or two scenes where I thought that no music would’ve been more fitting. There are a lot of examples in films where a lack of soundtrack really adds to the tension of the moment, especially when the music is present for most of the film leading up to that moment. In the end, it often has the potential to make the scene more tense, dramatic, and uncomfortable. I wish it was a widely used sound-mixing decision.

The last nitpick I have is regarding the voiceover narration. I know us SGK followers have quite the complicated relationship with voiceover narration, but there are some examples where it actually can help the film and add to the style of the movie. I believe that’s what they were trying to go for in The Devil All the Time with the author of the book narrating much of the story. But, sixty percent of the time, it seemed like it was unnecessary – as though he was describing things we already knew or things that could’ve easily been shown rather than told. There were, however, a few instances where I thought the narration was good and added to experience, but I think a script rewrite could’ve gone a long way.

Other than that, I felt like this film was a very entertaining and exciting thriller with plenty of dark twists but positive aspects to its story. Granted, this film is very dark and has messed-up murder and violence, a little bit of sexual abuse, and almost every character commits something terrible. Don’t watch it if you can’t stomach any of that, but, if you do happen to be into dark, twisted thrillers like I am, The Devil All the Time is perfect for you! 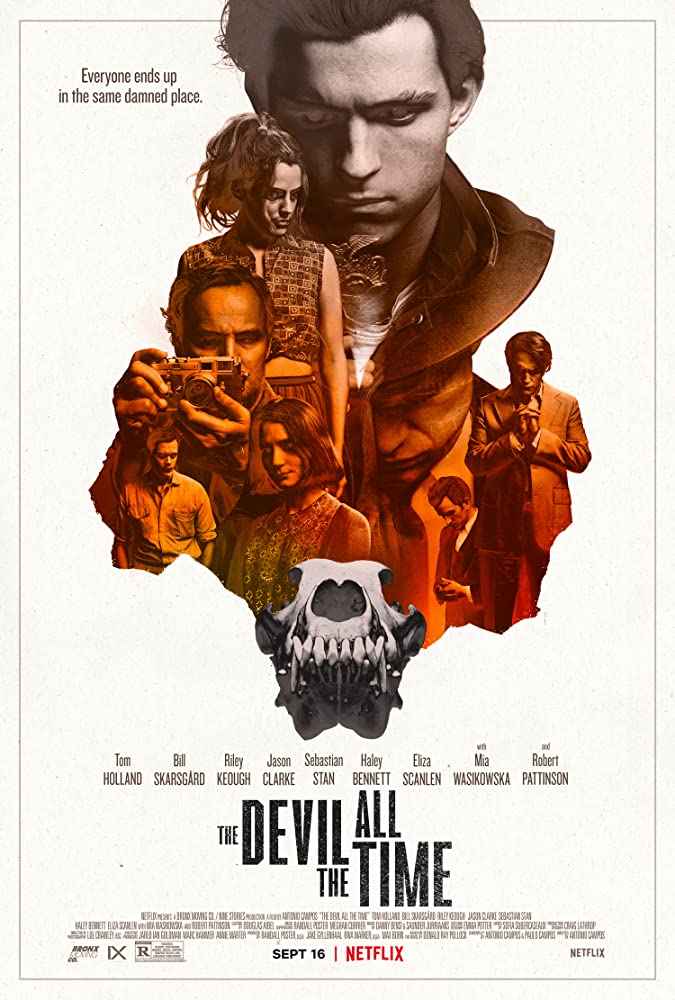