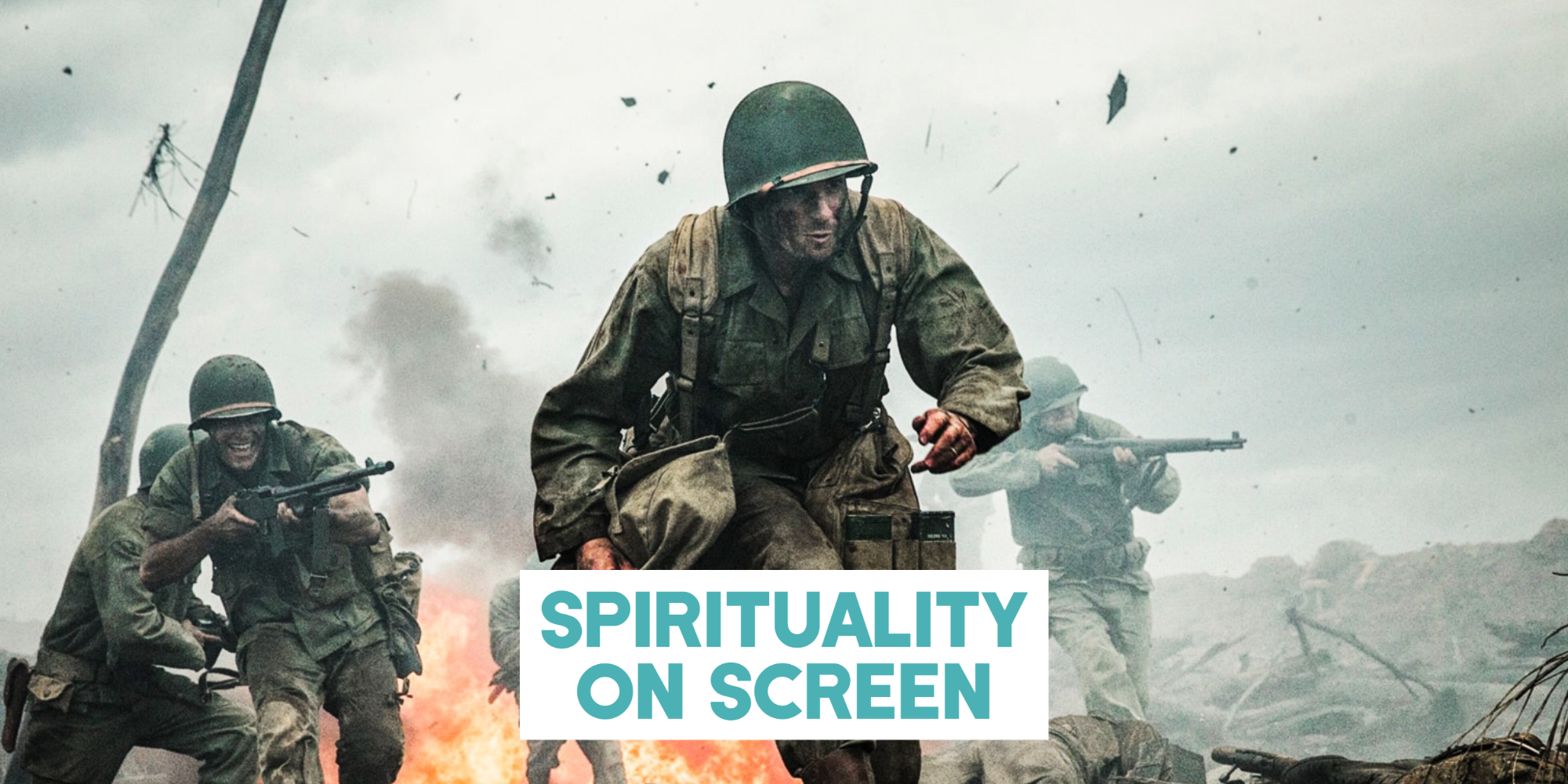 I recently saw Mel Gibson’s 2016 World War II bio-drama Hacksaw Ridge and was deeply moved by it. The film is based on the true story of Desmond Doss, an army medic who refused to carry a gun into combat. As I watched, I felt as though I were witnessing a Biblical battle unfold – one where God brought victory to the outnumbered Israelites, oftentimes giving them a handicap to prove that they won by His power and not by their own strength, like how He had Gideon further reduce his already small army based on the way his soldiers drank water (Judges Chapter 7).

Hacksaw Ridge had deeper themes of God’s glory than a lot of Christian studio productions do – without being on-the-nose! Never did a character outright say “I’m doing this to prove God’s glory!” Instead, he LIVED it, graciously, despite numerous obstacles. The subtlety of the writing, acting, and cinematography conveyed the spirituality of the story, and it was powerful.

A popularly complained-about Christian movie trope is the use of voice over at the start of and throughout movies. It’s seen as an overused cop-out, telling the audience what they should know instead of showing it to them – as though film weren’t a visual medium! Hacksaw Ridge did have a little voiceover at the beginning, but it was done right. We hear Andrew Garfield as Desmond Doss reading part of Isaiah Chapter 40 as we watch gruesome scenes from one of the battles. It’s brief, powerful, and not expositional. It hints towards the theme of the movie while making us question the very words as we watch the frailty of man play out before our eyes.

Another popular Christian movie trope that this movie uses but handles well is a court scene. It wasn’t the focus of the story – it was one of the obstacles that stood between Desmond and his convictions – and it wasn’t portrayed as horribly one-sided. Even though Desmond was outnumbered, the opposition wasn’t painted with one brush stroke. They all had an ounce of respect for Desmond and wanted to see him lose this case for his own sake, with the least amount of repercussions. Also, the source of the solution was highly unexpected and very touching.

All of the characters, even the platoon members, are portrayed with strengths and weaknesses. It makes them feel human. Doss included. His character shines strongly with integrity and conviction, but a lot of what we see of him now was born from mistakes he made during his painful upbringing. Even as Desmond was being “nudged” by the leaders to quit and was eventually abused by men in his platoon, he remained faithful to God’s call he felt strongly in his heart. He didn’t even turn in the men who beat him up when his sergeant took pity on him and wanted to know. His integrity earned him their respect.

“I don’t know how I’m going to live with myself if I don’t stay true to what I believe,” Doss told his fiancée when she was trying to encourage him to take the least path of resistance because she did not want to see him hurt. In court, he answered the judge’s questions respectfully but truthfully: “With the world so set on tearing itself apart, it don’t seem like such a bad thing to me to want to put a little bit of it back together.” We as the audience care about Doss, and it was encouraging to see God make a way for him to live this unique calling.

Not only did Desmond show compassion to his fellow soldiers when they least deserved it, but he even helped a few wounded Japanese soldiers he encountered between barrages. This movie did a fairly decent job of painting the Japanese not as irredeemable, inhuman monsters (albeit fierce), although you definitely feel for the American soldiers as they start out as the underdogs in this situation. Both the Japanese and US forces were formidable opponents. They had two very different approaches to war – Japan with their kamikaze (suicidal) tactics due to the high importance they placed on honor – and were very destructive when pitted against each other. Both sides suffered devastating losses in this battle alone.

My favorite scene, and one of the most powerful ones, was when the badly beaten US Army withdraws from the ridge as the US Navy provides covering fire. The ridge was a 400 foot-cliff with cargo netting affixed to the rockface so the soldiers could climb up and down, but it made being driven back extremely dangerous, and it was difficult to evacuate the injured, especially without a team. Desmond loses his friend in this ambush, dragging him to safety but too late to save him, and is left standing alone at the edge of the ridge, all the other able-bodied survivors making their way down the ridge. Desmond is torn about why God has him out here in all of this destruction and chaos when they lost so many men and he can’t save everyone. Then he hears from amidst the explosions fellow soldiers calling for a medic and crying out to God to save them and he knows what to do. He charges back into the hellfire and performs a 12-hour rescue operation by himself and saves 75 soldiers – all without a gun and with his body exhausted. He uses a unique knot he accidentally made in training to lower the injured to safety below, where two watchmen are surprised by the seemingly never-ending rescues. Desmond prays that God would help him “get one more” throughout the night to keep himself going. And time and time again, God gives him the strength and protection to do so.

The views about Doss went from “Do not look to him to protect you on the battlefield!” to Doss’s courage and obedience proving that there is a God so much so that his platoon didn’t want to go back into combat without Doss with them and without him praying for them first. Doss prays, and they finally succeed in taking Hacksaw Ridge.

Faith is at the crux of who we are as Christians, but it’s not easy to portray spirituality on screen. It’s not a visual concept, aside from the actions it prompts us to take that defy human logic and fleshly reason. War is probably the best physical conflict to pair with spiritual struggles. In her digital essay about why Frodo Baggins is a good character in The Lord of the Rings, writer/singer Mary Nikkel wrote of spiritually: “This is a hard thing to portray in movie form (the greatest weakness of the LotR movies is their inability to portray subtlety and spirituality, two traits the narrative Tolkien crafted requires). We see Frodo’s neck chapping from the actual physical weight of the Ring as a representation; well and good. But it’s hard to truly convey the immense mental weight, the crucible of enduring without utter collapse.”

Doss’s story is indeed a powerful illustration of Isaiah 40:28-29 – “The Lord is the everlasting God, the Creator of the ends of the Earth. He will not grow tired or weary, and His understanding no one can fathom. He gives strength to the weary and increases the power of the weak.” Doss LIVES his spirituality, with a few audible prayers and a handful of profound lines sprinkled in. The cinematography, music, and acting all work together to communicate deep themes without the need for extensive expositional religious dialogue.

Speaking of acting, all of the performances were incredible. Andrew Garfield nailed the part of soft-spoken, goofy-grinning Desmond Doss, while still delivering during the most intense and emotional scenes. Hugo Weaving was fantastic in the role of Tom Doss, Desmond’s drunken World War I veteran father. He played the shell of a man aware that he emotionally died with his comrades and regretful of the actions he takes that hurt his family. Teresa Palmer was heartfelt as Dorothy Schutte (Desmond’s wife) and Vince Vaugn was powerful, comical, and even compassionate as Sergeant Howell. Having talented, experienced actors and a solid director (known for directing Braveheart and The Passion of the Christ) definitely improve your chances of telling a profound faith story well on screen.

Unbroken: Path to Redemption is another true faith story war film about World War 2/ Japan, but I only found it to be serviceable; not incredibly moving. It was about PTSD and finding faith after war, so there was admittedly hardly any action, but I’m not an action-driven viewer. Perhaps there was too much talking – too many direct explanations of spirituality instead of illustrations and examples of it. Also the cinematography, the sets, and the costumes didn’t quite have the big-screen quality required of a story of this depth. It wasn’t a bad movie, but it didn’t resound in my heart like Hacksaw Ridge did. Of course, Hacksaw Ridge got an R rating for language, violence, and gore. Unbroken: Path to Redemption seems like it was cleaned up to keep a PG-13 rating. Maybe that took away from the gravity of the struggle but since it was the sequel to the actual war part of the character’s story it didn’t require as much war grit as Hacksaw Ridge did.

In the final scene of the film, Desmond, after sustaining wounds from deflecting two grenades during their final stand and victory, is lowered by his friends on a stretcher rigged on a pulley system. This scene has a heavenly quality – Desmond, weak but at peace, floating through the clouds clutching his Bible, with only the sound of his breath in his ears. The visual reminded me of the paralytic being lowered by his friends to Jesus. Here we have a humble yet willing character that God used mightily, by His grace. God used Desmond to accomplish what was humanly impossible, and He must have been proud of His good and faithful servant for trusting Him and relying on Him for courage and strength. That moment at the end of this incredible story compelled me to reexamine my life and my faithfulness to God – more than most on-the-nose Christian films have. Subtlety speaks volumes. Actions speak louder than words. Film is the perfect medium to carry these compelling, real-life stories to the next generation. 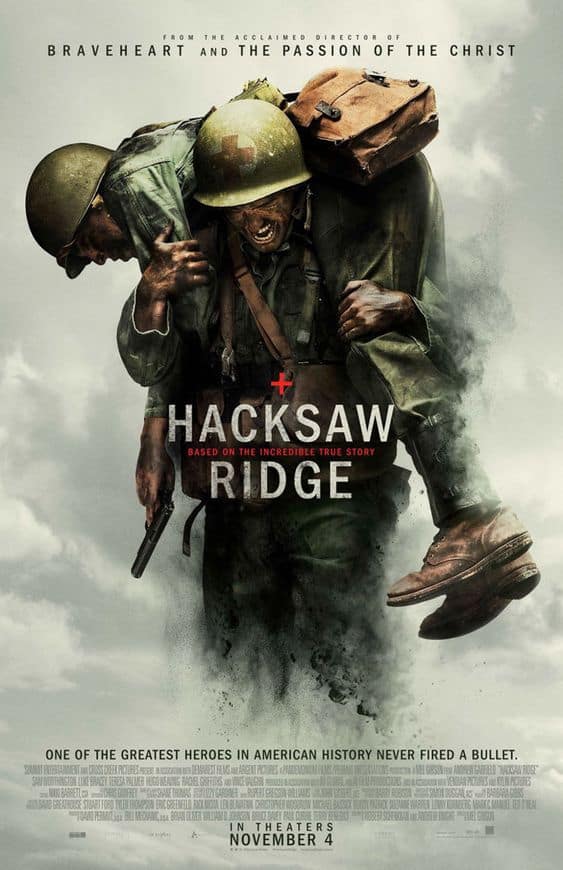