Movies VS Musicals: The Hunchback of Notre Dame 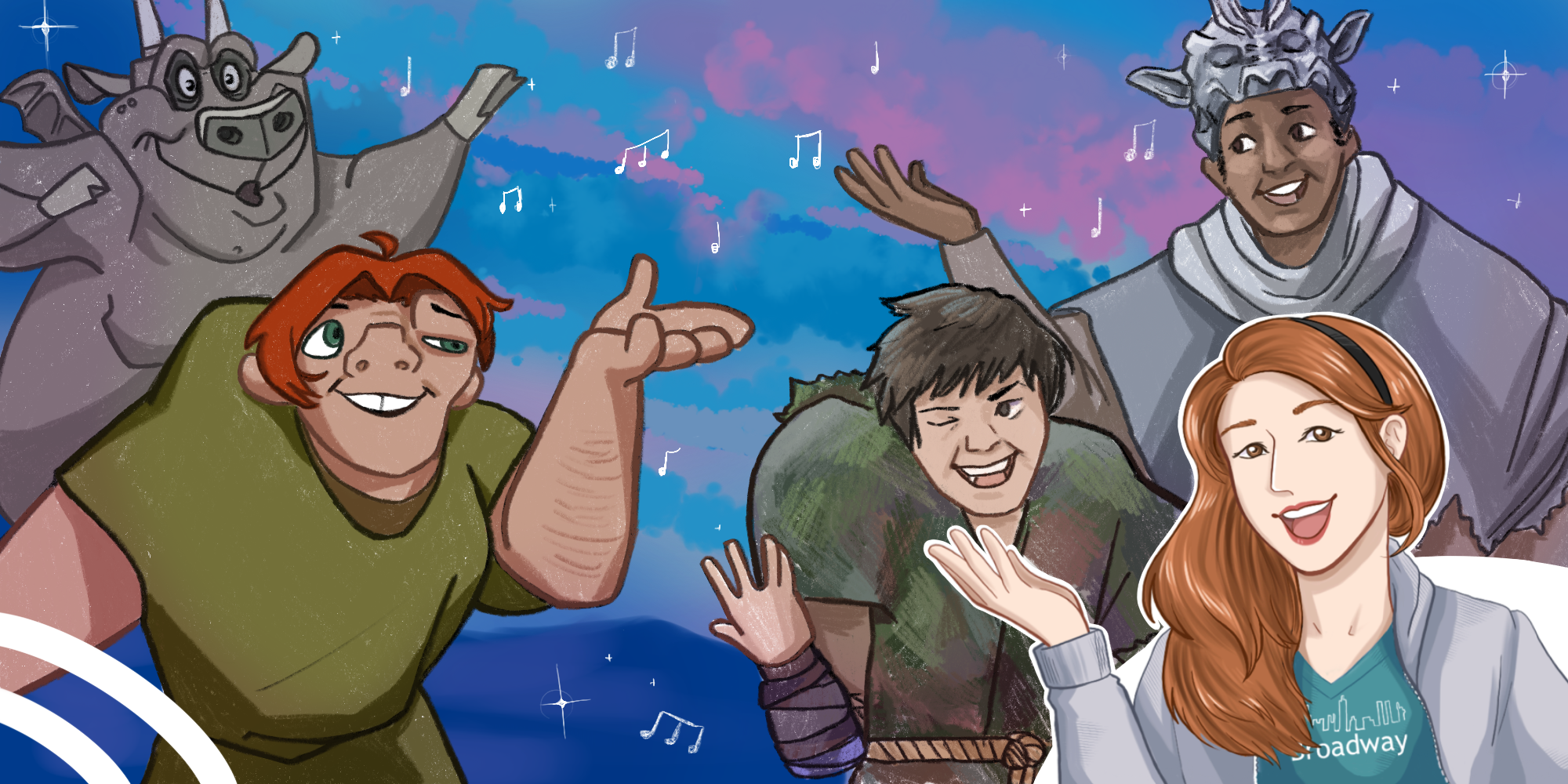 In 1831 Victor Hugo published his French gothic novel The Hunchback of Notre Dame. Hugo attempted to use his historical fiction about a deformed Parisian bell-ringer in 1481 France to save the Notre Dame Cathedral and other religious structures like it from being destroyed. The post-revolution France Hugo lived in was trying to leave Roman Catholic symbolism behind, even if it meant losing art along with it. His novel successfully encouraged his readers to preserve their rich history rather than destroy it. While his novel accomplished what he hoped it would for his country, it also carried timeless themes of justice, punishment, and freedom. It remains a beloved classic across the globe.

The Hunchback of Notre Dame has been adapted for cinema several times, the most notable being Disney’s 1996 animated musical version, which featured stirring songs by composers Alan Menken and Stephen Schwartz. In 2016, Disney brought back Menken and Schwartz to write a stage musical based on their movie for regional theatres and a studio cast recording. Broadway might have been the original goal, but it did not happen. Some fans speculate that the tone of the show was too dark in contrast to its animated counterpart. Other fans think a Broadway show would have been too costly to put on because the choir members would all have to be paid for each show, and the director did not want to cut back on the number of choir members.

The darker tone of the stage musical does make it a little truer to Victor Hugo’s novel than the animated movie was. In an attempt to lighten the story for animation, Disney had added tone-shifting, slapstick moments and goofy songs. They focused on these moments in trailers to make the movie marketable to children.

While The Hunchback of Notre Dame is the darkest Disney film to-date, it was a far cry from the source material. In the book, Quasimodo was broody – not optimistic. Phoebus was a womanizer who tried to seduce a smitten Esmeralda – not a good-hearted romantic. Canonically, Judge Claude Frollo – Disney’s big villain of the film (possibly the best Disney Villain with the hottest song) – genuinely cared for Quasimodo and willingly adopted him on Quasimodo Sunday. However, a rivalry between him and Quasi did form over Esmeralda and he eventually stopped caring about him. The biggest difference between Disney’s movie and Victor Hugo’s novel: Esmeralda lived. In the book, she was hanged.

There are unique ways Disney’s stage musical differs from the animated musical. Instead of the archdeacon guilting Frollo into raising Quasimodo after Frollo’s pursuit of his gypsy mother lead to her accidental death on the steps of Notre Dame, Frollo’s canonical brother had a deformed child out of wedlock and it was his dying wish that Frollo raises him. A friend of mine thought the religious guilt in the animated musical was compelling enough without making Quasimodo Frollo’s biological nephew. After all, religious grace worked positively for Jean Valjean in Victor Hugo’s other famous novel: Les Miserables.

The stage musical still had gargoyles, but it added in stone saints, and both new versions of Quasimodo’s stone companions were much less zany than the three comic reliefs in the film. The animated “A Guy Like You” about Quasimodo being a romantic catch was thankfully cut from the stage musical. The song “Topsy-Turvey” is still wacky, but the Feast of Fools was the real, opening event in the novel, so it made sense to keep it. “Made of Stone” and “Flight Into Egypt” were two new songs that I enjoyed.

The music in the stage musical built on the existing beauty of the animated musical’s soundtrack, thanks to Menken and Schwartz’s talent and teamwork. In the studio cast recording, Michael Arden as Quasimodo sang “Out There” arguably better than Tom Hulce’s soft and breathy vibrato in the movie. Ciara Renée as Esmeralda, Patrick Page as Frollo, Erik Liberman as Clopin, and Andrew Samonsky as Phoebus all sang exceptionally well and sounded much like their animated counterparts, if not better. The large choir added a grand, holy sound to every song in which they were present.

Phoebus’s new song “Rest and Recreation” was musically based on Phoebus’s theme in the movie score. “Topsy-Turvey” was extended into several variations to carry the story’s narrative further through song. Esmeralda’s new song “Rhythm of the Tamborine” was based on Esmeralda’s dancing song in the movie score. And in “The Bells of Notre Dame” – the crown jewel of both the movie and stage soundtracks – the big question of the story is changed from “Who is the monster, and who is the man?” to “What makes a monster, and what makes a man?”

One of my favorite aspects of the stage musical was when regional theatres cast deaf actors in the role of Quasimodo. In the novel, Quasi was canonically deafened by the ringing of the bells and was taught sign language by Frollo. Having a deaf lead actor sign lyrics added an extra layer of meaning to “Out There” and made the show very accessible to hearing-impaired audiences. Since it is a musical, one of the gargoyles functions as Quasimodo’s voice and sings along as the lead signs. The camaraderie of these two is astounding to watch. In Seattle, Washington’s 5th Avenue Theatre production, Joshua Castille played Quasimodo and E.J. Cardona, dressed as a gargoyle, sang as his voice. These two talented actors put on one of the most emotional and compelling versions of “Out There” I have ever seen and heard. It moved me to tears.

If you enjoyed the book or the movie, I recommend listening to the soundtrack. If you’ve read or seen neither, you may still enjoy this sweeping story with grand, heartfelt music (especially the choral music) that asks the age-old question: “What makes a monster, and what makes a man?” The musical takes a sobering look at humanity’s age-old brokenness and the damage of religious hypocrisy while whisking you off to historic France.