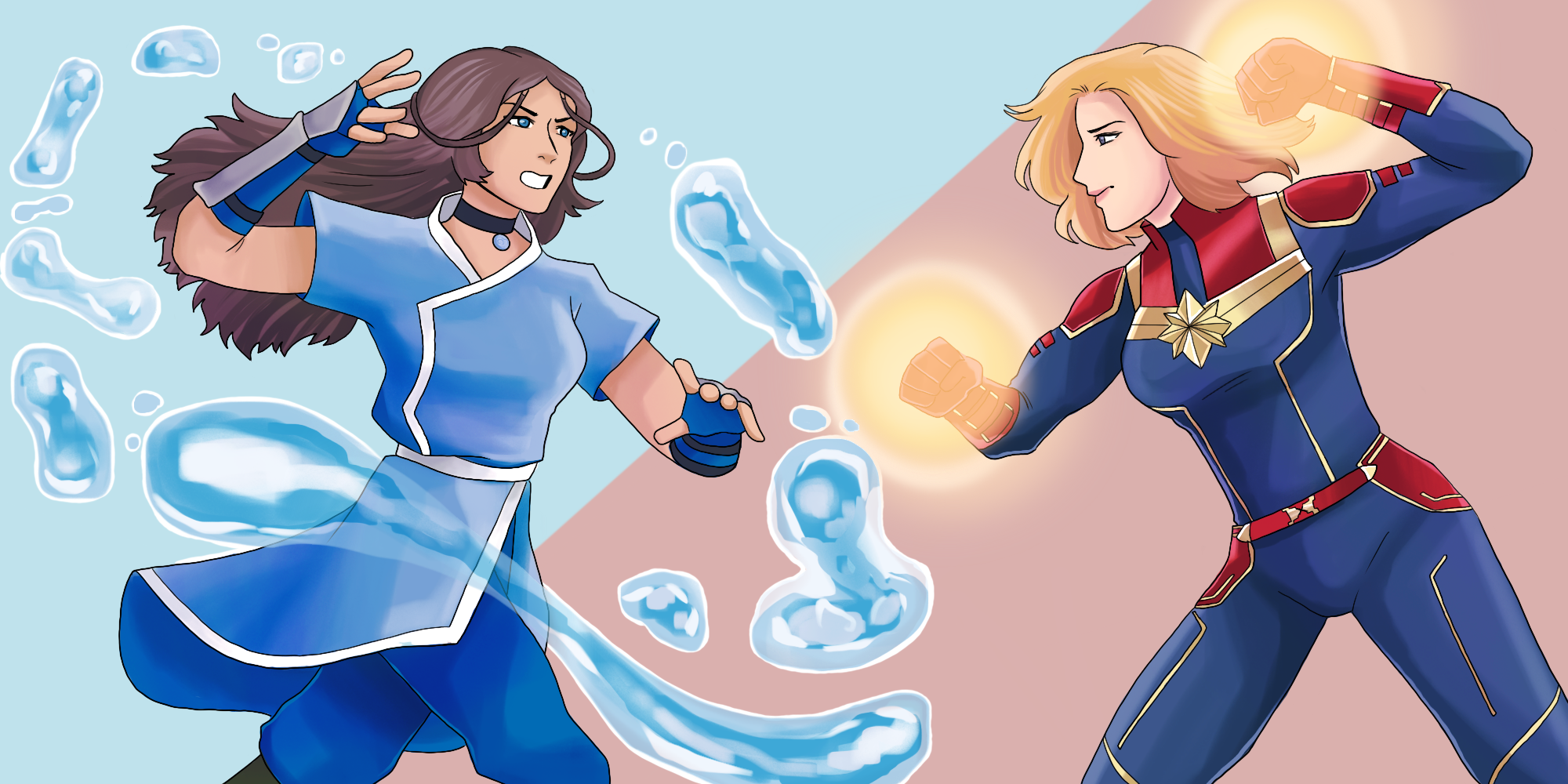 Now, don’t get too excited – This isn’t a YouTube Death Battle. It wouldn’t be a fair match. Disney’s Captain Marvel would win in a physical fight because “untouchable superpowers ex machina,” but Katara would absolutely dominate in a battle of character.

Wisdom, empathy, courage, and determination are qualities I admire in women – fictional and real – and hope to emulate myself. Yet, despite the rise of female-led movies and TV shows, I’m finding it harder and harder to locate role models with all of these qualities. Courage and determination are always present, but female characters who nurture, show compassion, and act humbly have gone out the window.

It’s as though writers see tender qualities as weaknesses. In turn, it feels more and more like women are being written as men. Rebellious and physically strong women are given the spotlight, but I personally find them unrelatable. I pride myself in thinking differently, but I’m not exactly “She-Hulk Smash the Patriarchy.” I’m lanky, thin, awkward, and love encouraging both men and women. I’m a peace-keeper; not a fighter.

Not only do modern movies glorify tough personality traits in women, but dominant occupations are given extra attention as well: fighter, spy, businesswoman, political leader.  This isn’t to say that women can’t be adept fighters and influential leaders, but we have more personality variations and job options than “kick-butt action heroine.”

Motherhood, for example, seems like a thing of the past in movies – save for Elastagirl in Disney’s The Incredibles (2004), who is a SUPER cool mom (pun intended, but it’s true!), and Emily Blunt’s character in A Quiet Place. I’d love to see more moms take the stage in summer blockbusters or Oscar-nominated films. Motherhood is one of the toughest jobs out there, and it’s unique to women!

I’ve noticed that Hollywood shies away from the Bible’s description of a virtuous woman. Proverbs 31 praises these qualities: trustworthiness, diligence, shrewdness, generosity, and the wisdom to choose words carefully. I don’t know about you, but those sound powerful to me! After all, physical strength isn’t the only type of strength out there – there is also strength of character. To be seen as strong, women don’t need to be pumped full of testosterone, jumping from rooftop to rooftop, yelling out everything they find to be true, and bashing in anyone’s face who disagrees with them. Women don’t need to be unfettered by commitment or go the extra mile to conceal any and all hints of character flaws. Women are more complex than that.

This brings me to Disney’s Captain Marvel movie (2019). Forgetting the comic books for a moment, Carol Danvers got a lot of flak for being a bland character, but moviegoers got a lot of flak for saying so. Suddenly disliking a shallow portrayal of a strong woman meant you were sexist. But how can you connect with someone who hardly shows any weakness – emotionally or physically?

I get that Captain Marvel has Superman-tier powers, but a little more character development would have gone a long way. It just felt like she was there to prove that women are as powerful as men. Even though Diana Prince in DC’s Wonder Woman (2017) had incredible powers, she was still a more relatable and admiral example of a strong female. DC usually struggles with their live-action movies, so shouldn’t Captain Marvel have been just as good, if not better? (To Disney/Marvel’s credit, they did most of their strong women right. Black Widow and Scarlet Witch in The Avengers movies, and Gamora in Guardians of the Galaxy, for example.)

One of my favorite strong females in fiction is Katara from Avatar: The Last Airbender (2005). She is talented, confident, compassionate, loyal, and nurturing. She loves and takes care of her brother despite his sexism at the start of the show (while definitely calling him out for it). She does everything she can to better herself while actively supporting those around her – family, friend, or stranger alike.

She has flaws. Sometimes she takes her mothering and meddling too far. She gets jealous. She steals a couple of times. She understandably struggles to forgive the nation and the man responsible for killing her mother during the war. She excels in combat but also gets knocked down and kidnapped. She is strong, she is brave, but she isn’t untouchable. Seeing a character struggle, falter, and eventually grow is more inspiring than watching someone flawless.

Katara even has her own “smash the patriarchy” moment when old-fashioned traditions stand in the way of her growing as a waterbender. And she’s a young woman of color! But she doesn’t feel like she exists solely for the purpose of girl power or strong female representation, as many female leads nowadays do. She is her own character, and her contributions within the story genuinely matter. She is an inspiration to girls and women and boys and men alike.

All of the girls in Avatar: The Last Airbender are strong and relatable. Toph is a tomboy with an attitude – she is also blind but a very adept fighter. She uses what people would think of as a disadvantage to her advantage. She embodies determination, but even though she is tough, she has parent issues that affect her actions and attitude. Kyoshi Warrior Suki is near-perfect from what we see of her in the show, but even she doesn’t deny her desire for love and companionship. She doesn’t need a man, but she still wants one. She said it best: “I am a warrior, but I’m a girl, too.”

Even female villains in Avatar: The Last Airbender have personalities, flaws, and character arcs! Ty Lee is the supportive, acrobatic girly girl who learns to truly embrace herself and not be pushed around. Mai is bored from her reserved, rich lifestyle, but deadly accurate with kunai. She learns to express herself and stand up for what matters to her. Azula is, well, Hello Future Me made a whole YouTube video about her psychology, and it’s awesome.

I understand that there is a lot more room for character growth in a series vs a movie. There always is, and that’s why it’s my preferred method of visual storytelling. Superhero cartoons tend to be better story-wise than their cinematic counterparts. And perhaps the Captain Marvel comic books do her justice. But the fact is many people don’t take time to read comics or watch a whole series, but they will go see a headlining movie.

I’m grateful to live in a time and place where women are free to shape their lives. I’d just love to see the quality of writing that brings women to life on the big screen improve. Yes, we’ve come a long way from women predominantly playing seductive eye-candy supporting roles, but we’ve still got a ways to go. Women are multi-faceted. Tender qualities are not weak. Inner strength can be just as compelling as physical prowess. I guess, nothing is stopping me from doing my part! Fellow writers, let’s use our own experiences – successes and failures – and the experiences of those around us to help craft genuine stories. Then we can truly inspire others.