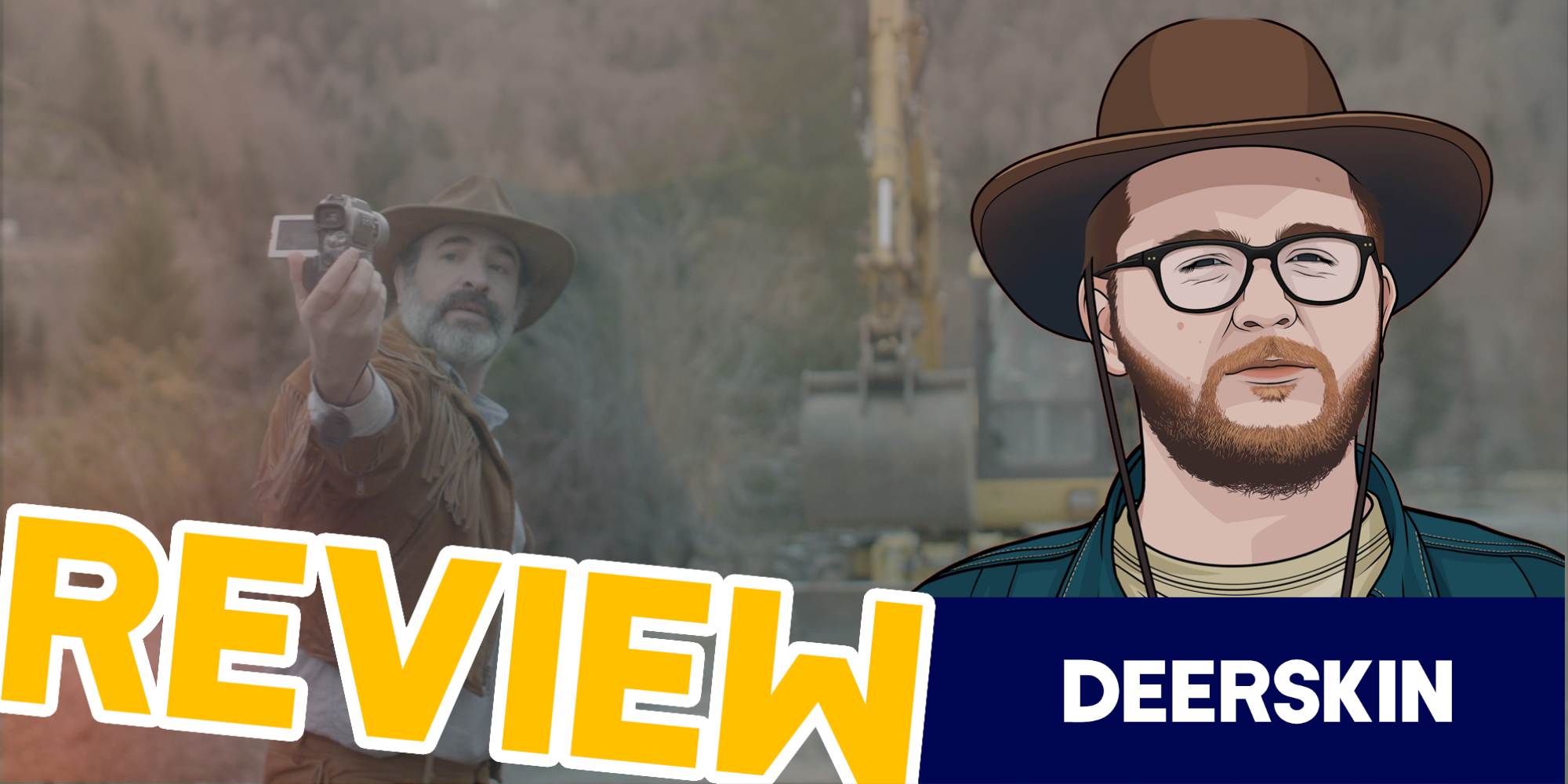 Well, needless to say, guys, now is not the greatest time to be a film critic. With all these big films being postponed and theaters being closed down, we are forced to turn to on-demand streaming sites. But even then, Netflix, Hulu, Amazon Prime, Disney Plus, and the like can only release so many original films at a time, especially since most of their releases are primarily TV series. So please be patient, everyone. I’m trying the best I can!

For the past few weeks, they’ve been screening Deerskin (or Le daim), which is the new French film from independent filmmaker Quintin Taran—um… I mean, Quintin Dupieux. I had not seen any of Dupieux’s previous films—specifically his most popular Rubber, which is a film about a lone rubber tire that rolls around and goes on a murderous rampage. But I was familiar with the lead actor, Jean Dujardin, from his Oscar-winning performance in The Artist. Being a fan of The Artist, my interest in this film was piqued.

While it is not near as ridiculous in concept as Rubber, Deerskin is no less bizarre. We are introduced to the main character, Georges, who is a fresh divorcee who has become obsessed with a recently purchased deerskin jacket. His obsession becomes so extreme that he begins to believe that the jacket has a mind of its own, and he has conversations with it. Eventually, Georges agrees to pursue the jacket’s “dream” of being the only jacket in the world. Not strange at all, right?

While staying in a humble French village town, Georges meets a young bartender named Denise and, while flirting, makes her believe that he is a filmmaker. SPOILER ALERT: He’s not! Trapped in his lie, Georges goes about filming random footage around the town on his personal camcorder. Also, I should mention that Georges’ ex-wife has blocked access to his bank account. So, since he has no money, he hires Denise as an editor and manipulates her into letting him “borrow her money to help fund the film.”

“But what is he even filming to keep his editor busy?” you might ask. Why, footage of random people giving up their jackets so he can steal them, of course! That’s right! He’s using this act as a filmmaker as a cover-up so he can reach his goal of owning the only jacket in the world. Georges goes from a depressed divorcee to a serial jacket thief and, eventually, to someone even more twisted and psychotic.

Needless to say, this story is quite unique. I love its ridiculousness. It keeps you guessing the whole time, and it continues to escalate to something you wouldn’t expect. It is a very short film – just over an hour –  but it feels appropriately compact.

I really enjoy the characters in this film and the performances that bring them to life, especially Jean Dujardin, who plays Georges. He does a great job of making this crazy person seem real. Even though there are several funny moments with his character, he doesn’t go over-the-top as though it were a comedy. Georges is a ridiculous example of an egotistical and manipulative psychopath, and Dujardin pulls off the act very well.

Adèle Haenel plays Denise, and she’s really enjoyable to watch. I love how Denise’s hidden love for film and editing reveals itself slowly as her and Georges’ relationship grows. You start to worry about her because you don’t want anything bad to happen to her. But she’s definitely not the sweet and soft type. She’s smart and grounded and counteracts Georges’ character, who is obviously bullcrapping all of his knowledge of filmmaking. Adèle does a great job with this character. Apparently, she is one of the lead actors in Portrait Of A Lady On Fire, which I’ve heard a lot of people talking about but haven’t yet seen. Now I’m intrigued to see her in more films.

The script is well-written and hilarious. It’s not like it’s full of silly gags and jokes. It’s the ridiculousness of the story and the absurdity of Georges’ character that makes the whole thing laughable. It’s not the kind of script that needs jokes because it knows the movie is already funny in itself.

This film is beautifully shot as well. The lighting and color-grading do a great job of creating the tone and feel of the film. The only issue I had with it is a personal preference; I felt like some of the darker, more violent scenes should’ve been filmed on a tripod rather than filmed hand-held. I felt like it would have stylized those scenes to fit in with the overall dark comedy feel of the film. But the director’s approach to these scenes did not ruin my viewing experience.

The soundtrack is also very fitting for this film, using 60s and 70s-inspired music as well as recognizable songs from that time period. There is an especially spooky and mysterious segment in the score that gets reused throughout the film. It seems like an artistic choice, but I’m undecided about whether or not I liked it.

In conclusion, I am a big fan of this film. I will say it won’t be for everyone. I’m sure it’s obvious to you guys, but this is a foreign film and there are subtitles. But, as someone who doesn’t go out of my way to watch a lot of foreign films, I found this fairly accessible. And, of course, the subject matter of a psycho who talks to his deerskin jacket and steals everyone else’s jackets might not be your cup of tea like it is mine.

If you are interested in checking this out, there’s a chance your local theaters may be screening it online! To find out, you can go to the movie’s website: https://www.deerskinmovie.com/.

In my opinion, and to quote the movie: this film has “killer style!” 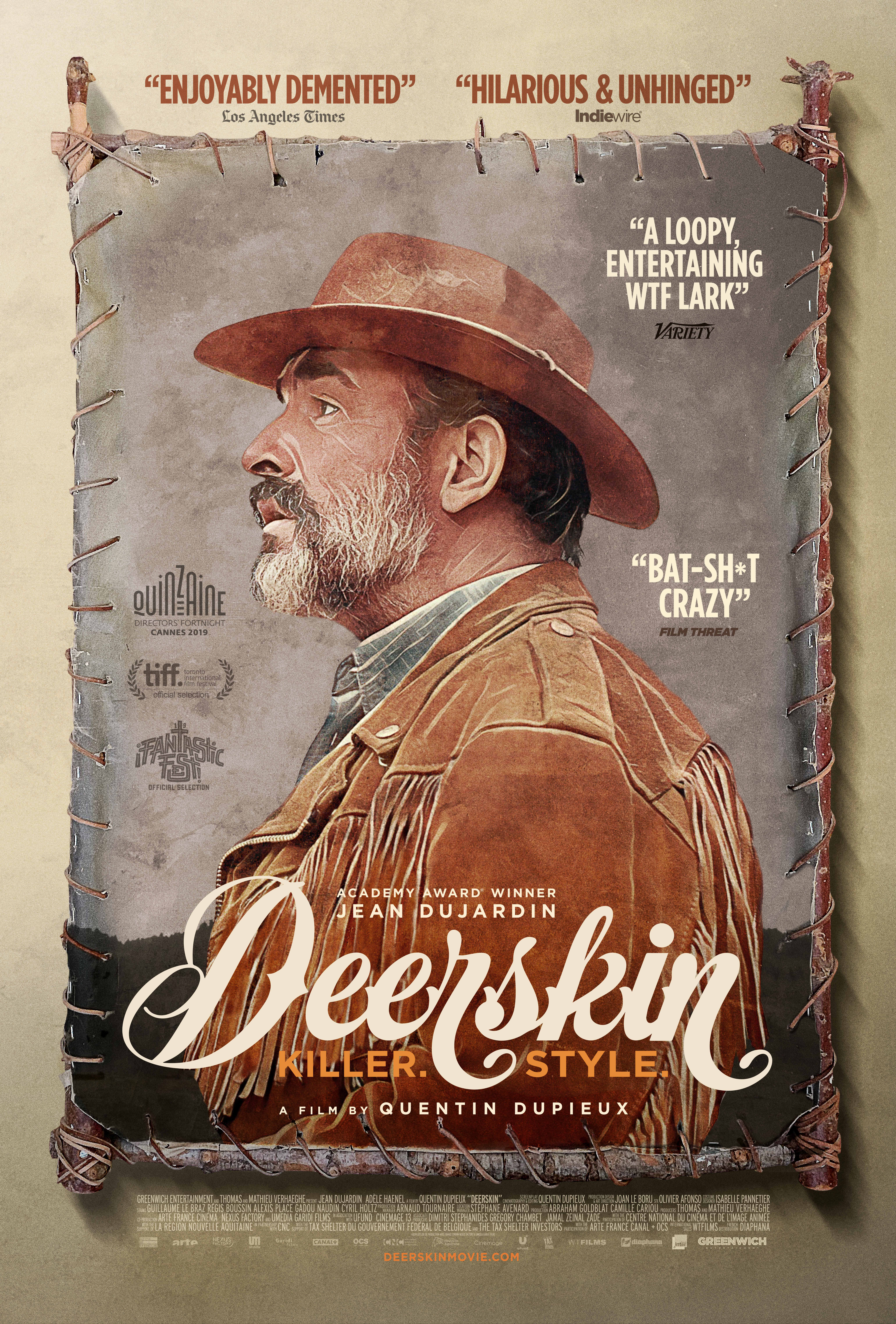