The Sequel to Success 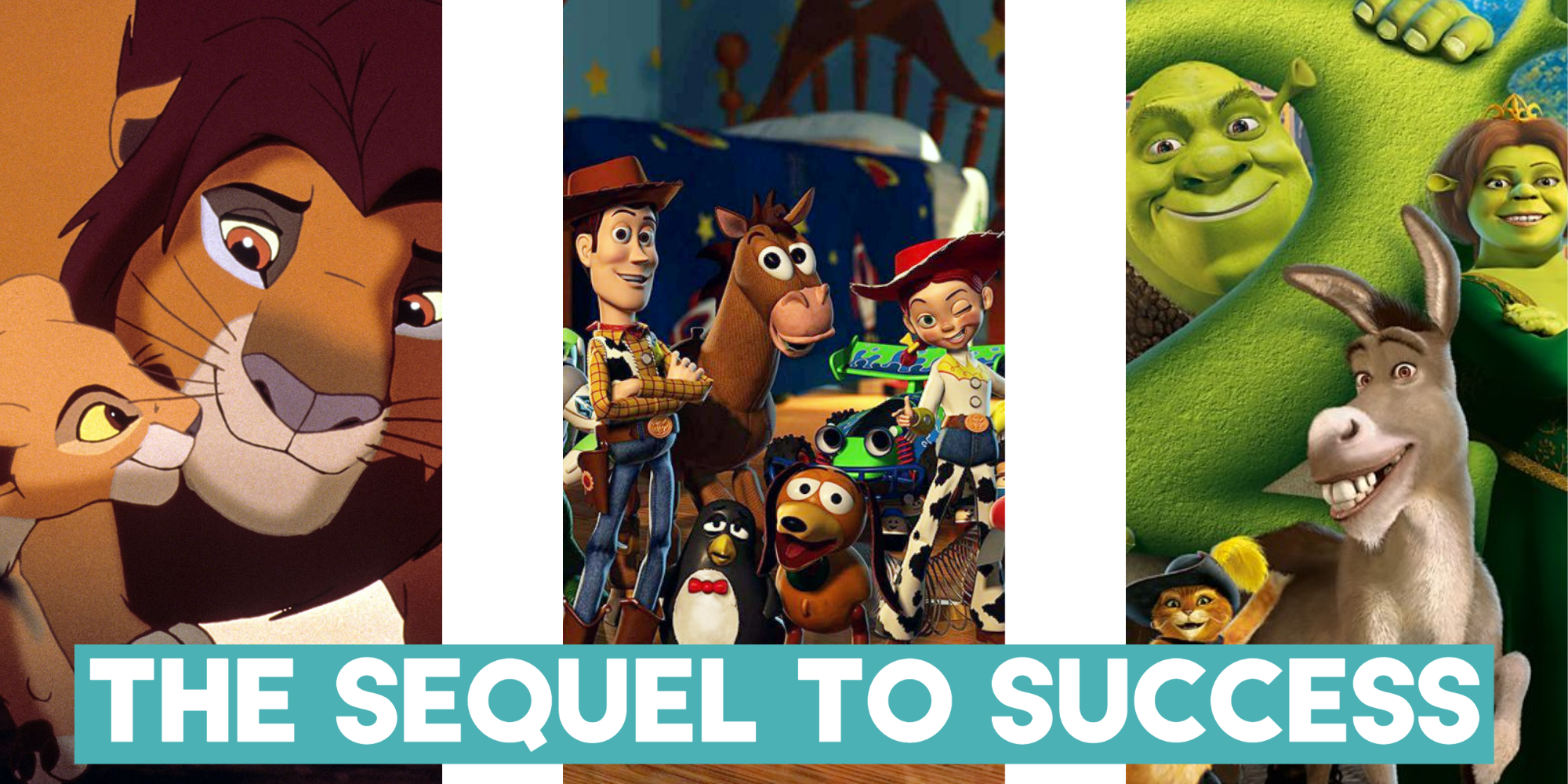 What makes a good sequel?

I was the weird kid who grew up loving a handful of sequels more than their originals. Maybe that’s because I watched the sequels before the originals. This was prior to the days where digital streaming and online shopping made every movie easily accessible. And, for some reason, my family never used Blockbuster.

It started around age 6 when I watched part of The Lion King II: Simba’s Pride in a doctor’s waiting room. It was the first Disney movie I recall viewing, and I quickly fell in love with the characters, songs, and conflict. I got a magenta Lion King II “Upendi means love” t-shirt that I stretched to fit longer than it should’ve, and I had a colorful pillowcase featuring Kiara and Kovu on either side. Even though it took years for me to get a chance to watch the movie in its entirety, it was my favorite Disney movie until Lilo & Stitch stole first place.

Then came Toy Story 2. My best friend let me borrow her VHS, and I remember watching it by myself when she left after a day of swimming. I was so enthralled by the story that I had to stand at the back of the room, as far away from the TV as possible; some of the scenes were too exciting for me to watch on my own! I adored the characters and was moved by the spirit of childhood the film magically, yet maturely represented. I started saying goodbye to my toys whenever I’d leave my room for the day.

Then, embarrassingly, came Shrek 2. My best friend (she’s largely responsible for making me into the “cool nerd” I am today) had the four-player Game Cube game, and it was a blast to play. Then, when my mom, my sister, and I saw the transformation scene at Target, we had to purchase the full movie. Shrek 2 has my favorite music montage scene out of anything I’ve watched to date. Shrek 2 – when a sequel was better than the original, featuring “Holding Out for a Hero” – when a cover was better than the original. I’ll even forgive Kyle for playing the piano in G Minor when Fairy Godmother clearly told him to put it in C Minor.

The reason I’m embarrassed by my love for Shrek 2 is because I enjoyed it SO much that years later, in one of my college film classes, I gave a PowerPoint presentation on why it was a good movie. Yes, while others talked about memorable cinematic classics, I talked about a Shrek film. And here I am now, a working girl, blogging about a Shrek film. What can I say? I’m a sucker for colorful animation. quirky characters, and solid storytelling!

Was the fact that I saw these sequels before their predecessors the reason I liked them better? I don’t think so entirely, but it does help them earn nostalgia points. However, I watched Star Wars: Episode I (a prequel story-wise, but a sequel when you consider that it was made after the originals) before Episode IV and did not enjoy it at all. It’s the weakest of the Star Wars Prequels. (I won’t go into the Star Wars Sequels…) Even before that, I watched plenty of forgettable, cash-grabbing Disney sequels: Cinderella 2, the Beauty and the Beast sequels, and – oof – Pocahontas 2… Admittedly, after seeing the originals.

Budgets aside (read this inspiring blog for more detail on Toy Story 2 and Pixar’s response to budgetary restraints), there is a way to tell a good story with a sequel, even if the visual budget has been slashed. Here are 3 things I’ve noticed my favorite sequels doing right creatively, which I think are keys to success for any sequel:

Introduce compelling new characters. Maybe it’s because I’m a girl, but I strongly connected with both Kiara (Simba’s daughter) and Jessie the yodeling cowgirl in The Lion King II: Simba’s Pride and Toy Story 2 respectively. This was back when female characters were allowed to show flaws and therefore felt believable. Kiara was young, headstrong, and naïve (much like her father was at her age), but ultimately learned the value of love and family. Jessie wrestled with deep abandonment that painted her view of herself and her future.

Not only should new characters be compelling, but it helps when they’re also likable and fun! Bullseye, Woody’s horse, was a “comical animal sidekick” without being obnoxious. We got a new Buzz Lightyear alongside the old, allowing us to relive the humor of a too-serious space toy plot without undoing the original Buzz’s character arc (Pixar cleverly avoided the “successful formula rehash” pitfall that plagues sequels). Stinky Pete was a tragic villain (and one I did not see coming in my childhood naivete), Al was a sleazy baddie voiced by Wayne Knight, and Zurg, also voiced by Knight, was a creative version of Darth Vader to Buzz’s Luke Skywalker.

In Shrek 2, as a girl who grew up with two red tabbies, I adored Puss in Boots! Besides, how can anyone dislike those galactic eyes, that swashbuckling swagger, and the suave voice of Antonio Banderas? Fairy Godmother and Prince Charming were entertaining, competent (well, the former) villains. Fiona’s parents felt like real parents – not very much like my own, but still like parents.

In The Lion King II: Simba’s Pride, I enjoyed misunderstood Kovu as Scar’s reluctant prodigy and Kiara’s love interest. I was never quite sure HOW he was Scar’s prodigy – but Zira had been part of Scar’s harem – I mean, pride. And Nuka had very little potential as a predecessor.

Conversely, I didn’t care much for the new casts in Toy Story 3 and Toy Story 4. Yes, the characters were interesting and tragic, but they weren’t as endearing. Lotso and Gabby Gabby were creepy, and Forky was a little too dumb for my taste. Also, both plots didn’t feel necessary, but more like they were trying to drive points home that the first and second movies had already touched upon. That doesn’t mean I didn’t enjoy watching them, but they didn’t surpass Toy Story 2 in my book.

Grow the existing characters. In The Lion King II: Simba’s Pride, it was fulfilling to see our favorite care-free lion cub grown up, leading his pride, and raising his daughter. That’s a big part of the circle of life for many living things. While Nala was involved in parenting, Simba’s relationship with Kiara was the focus. The song “We Are One” was Simba’s way of teaching Kiara about the world, and she challenged it and learned from it and became her own lioness whom Simba came to respect.

In Toy Story 2, Woody struggled to come to grips with time slowly pushing him and his beloved human Andy apart. He had to choose between immortalizing himself for adoring fans in Japan or enjoying the few years of real love left with Andy. It’s a moving, heartfelt conflict. Meanwhile, Buzz got to look in a mirror as he wrangled his serious space ranger twin while playing leader in Woody’s absence, even finding romance for himself in the end!

In Shrek 2, Shrek and Fiona’s relationship was put to the test as family expectations threatened to tear them apart. Thankfully, the conflict ultimately served to bring them closer together. Shrek’s love for Fiona became more selfless as he strove to do what he thought would make her and her parents happy.

Feature an exciting new plot. The Lion King II was “Romeo and Juliet” to The Lion King’s “Hamlet.” The plot wasn’t new in the sense of literary history (there is nothing new under the sun), but it was new for the franchise. And, being Disney, feline Romeo and Juliet got their happy ending. I was inspired by Kiara and Kovu’s ability to overcome their people’s prejudices with love.

In Toy Story 2 I admired that the story explored what toys feel when we grow beyond them. Woody was at the start of his dilemma while Jessie was recovering from the conclusion of hers. Plus, the B-plot of Buzz and friends trying to rescue Woody from his toy-napper was a fun romp. Both plots converge and bring magic to the typically mundane setting of an airport. (My first exposure to airports!)

In Shrek 2, we saw what comes after happily ever after: in-laws. I once either read or heard in an interview that the creator of Shrek films wrote each story during turning points in his own life: falling in love (Shrek), navigating marriage (Shrek 2), becoming a father (Shrek the Third), and dealing with a midlife crisis (Shrek Forever After). These are relatable phases of life. Plus, in Shrek 2, we got to see the first movie’s ogre curse in reverse: Shrek as a human!

From my childhood favorites, I’ve learned that the best chance a sequel has to do well is to avoid rehashing a successful formula, but to instead delve into the world and the characters to find the new story. In the Frozen 2 art book, the creators shared that they did not write the second film when there was a demand for it, but waited until they found the heart of the Arendelle sisters’ next journey. It’s important to find a fitting story for ever-growing characters. because we as people don’t stay the same, and stories – even set in the wildest of fantasy worlds – are very human experiences. Also, introducing a loveable new face or two to complement the existing cast will make your sequels all the more memorable. In the end, sequels that do these things are regarded as just as good as their originals – or even better.